As promised, here’s an update detailing my upcoming performance plans, as well as another show danced by many of my peers that is worth checking out this weekend.  Keep reading to find out more about these two student showcases, both featuring Columbia University and Barnard College students.

Now it it’s sixth year, the Columbia Ballet Collaborative is a student-run and directed ballet company comprised of students from Columbia University’s undergraduate colleges and professional schools and programs, including many former professional dancers who have since returned to academia. Twice each year, CBC commissions and presents new works by emerging and established New York-based choreographers as part of its mission to enrich the Columbia University community’s artistic culture while also serving as a means for Columbia dancers to connect with the New York dance community at large.

I will be performing in Dan Pahl’s work, The Sum of Its Parts, a new ballet that explores the ways in which individuals come together to form a unified group. This is Dan’s fourth year as a member of CBC, but his first experience as a choreographer for the group. When I asked Dan to tell me a little more about his inspiration for the piece, he said it all began “with a piece of music by The Shanghai Restoration Project, a group that blends traditional Chinese instruments with Western electronica sounds. As I worked with my dancers and created movement, I began to conceptualize the piece as one in which each dancer played a prescribed role in a game or ritual, the way children assign arbitrary parts to play in a game. As this revealed itself, I worked with the idea of how these parts come together to form a whole, and how each part reveals itself as important.” From a dancer’s perspective, this piece is extremely physical – we jump on chairs, we lift each other, we never stop moving. In Dan’s words, it might help to “think of the piece as a light-hearted, playful game of tag or follow the leader with some darker and questioning undertones.” 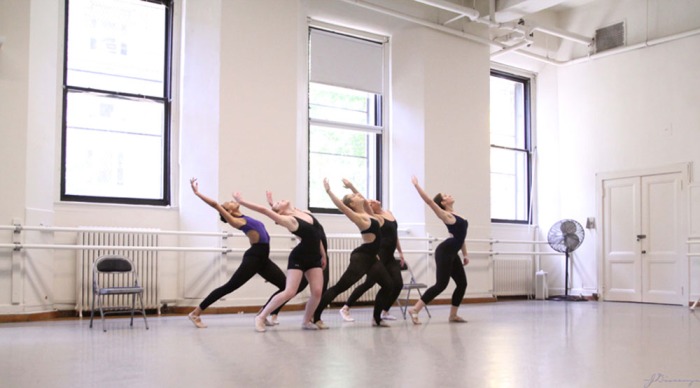 To learn more about CBC, visit www.columbiaballetcollaborative.com, or become a fan on Facebook.
For tickets to this season’s shows at MMAC, click here.

Now it it’s ninth season, The Barnard Project at New York Live Arts, or just “NYLA,” as it is so fondly referred to by Barnard and Columbia dancers, has become the Barnard Dance Department’s fall tradition. Each fall semester, the Barnard Dance Dept. commissions four choreographers to either set acclaimed works or create new works on the school’s dancers, to be performed at this Chelsea hot spot for new and progressive dance works.

This year’s program features new works by Lance Gries (a former Tricia Brown dancer) and Boyzie Cekwana (a South-African choreographer who’s participation in the project marks the first collaboration between Barnard Dance Dept. and NYLA’s Suitcase Fund for international projects), as well as restagings of Lucifer Kicking (detail), a popular piece by Annie-B Parson, originally made for her company Big Dance Theatre (which just closed its own season at NYLA a few weeks ago), and Heads Revisited, a reworking of the 1999 trio State of Heads (which will also be performed by Uchizono’s company at NYLA next month) by Donna Uchizono that screams “post-modernism.”

As an alum of The Barnard Project, my experience has been overwhelmingly positive. I’ve performed works by Susan Rethorst and Beth Gill under the Barnard Project umbrella, and I think almost every Barnard and Columbia dancer would agree that their college dance experience has benefited from working with these hand-picked choreographers (the list of accomplishments includes Guggenheim Fellows, a MacArthur “genius,” and Bessie winners, to name a few). But besides connecting students with established choreographers, perhaps the most admirable aspect of The Barnard Project is in the way in which it endeavors to overturn the typical conception of “student work” as second-rate by consistently challenging its dancers to work beyond their traditional training and, through an intense rehearsal process, develop into versatile artists who might one day have a NYLA season of their own.